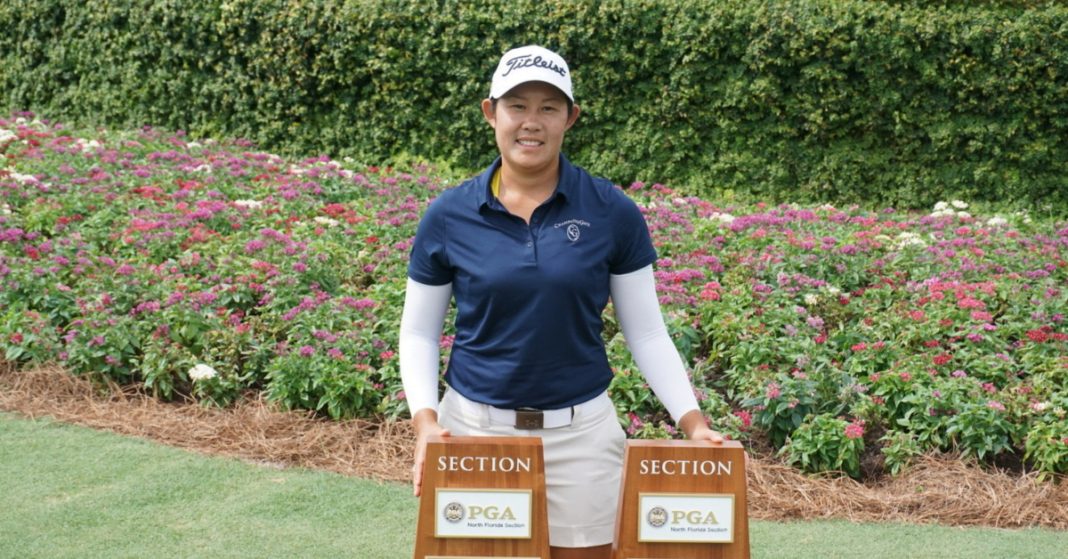 Check Out the Event Recaps

Entering today’s final round, Changkija had an impressive lead against Matt Borchert and Gregory McClimans. Even with a double bogey on the 13th hole, Changkija’s three birdies sufficed and secured her victory. Koch had the best round of the day, shooting -4 as he successfully clawed his way back toward the top. David Hronek carded an eagle on the 16th hole, ending today’s round at -3 and finishing third place overall. Matt Borchert finished fourth at +4 (220) after three rounds of play. Rounding out the top five is Nick Joy, who finished one stroke behind Borchert.

After the Championship, Koch ranks first as the “2022 NFPGA Player of the Year,” surpassing Borchert who falls to second, and Changkija, who remains at third. Hronek remains fourth, while John Somers rises to fifth. Changkija ranks first as the “2022 NFPGA Woman Player of the Year,” ahead of Connelly-Eiswerth at second, Borocz at third and Motta, who finishes fourth.

Once again, congratulations Sandra Changkija on your remarkable victory and first-time Section Championship wins! We want to thank all of our competitors for an incredible three days of play at TPC Sawgrass! Thank you to the TPC Sawgrass team for your hospitality and hard work over the course of the event. It is truly appreciated by our team and players. Lastly, thank you to our Business Impact Partners for coming out on the course this week and supporting our Championship.

P.S.- We are quite grateful that the weather was on our side today! Check out the full leaderboard here!

Day 2 of the Section Championship is officially in the books… and the battle for victory intensifies!

The three-way tie for first place vanished as Sandra Changkija emerged as the sole leader, finishing Round 2 with an even par (72). After two rounds of play, she leads at -3 (141) against Matt Borchert, who fell to second place, and Gregory McClimans, who ascends from fifth to second place, tied with Borchert. McClimans had an impressive showing, which included an eagle on the ninth hole!

After two rounds of play, Mark Rummings and Greg Koch are tied for fourth place. Rummings and Koch inched their way up, breaking free of the 8-way tie for seventh place they found themselves in after Round 1. Rummings carded four birdies, three of which were within the first five holes. Rounding out the leaderboard is a four-way tie for sixth place: John Somers, David Hronek, Nick Frontero and Nick Joy. Frontero fell from the top spot but was able to make a birdie on the twelfth hole. Impressively, Somers made another eagle… this time on the second hole!

Heading into tomorrow’s final round, Changkija certainly boasts momentum after a notable second round, but with three other players also shooting even par, as well as Nick Joy, who had the best second round of the day, -1 (71), the Championship title is still in play!

With only one round remaining, the title is still up for grabs! Check back tomorrow for the final round results, and click here to see the entire leaderboard!

Note: Due to a weather delay, one group has yet to finish holes 17 and 18. They will resume play in the morning.

Day 1 of the 2022 NFPGA Section Championship is off with a bang!

TPC Sawgrass welcomed 100 NFPGA Members, hungry to snatch the title of Section Champion winner. With a full field and the pursuit of victory on the line, it’s no surprise that the leaderboard is tight heading into tomorrow’s second round.

After the conclusion of today’s opening round, Matt Borchert, Sandra Changkija and Nick Frontero all head into tomorrow’s round tied for first place after finishing at -3 (69). Borchert, who is currently ranked No.1 for the “2022 NFPGA Player of the Year,” carded four birdies on the back nine. Borchert, Changkija and Frontero all carded five birdies during the 18-hole round. Hot on the heels of the three leading players is David Hronek, who is seeking to repeat his victory of being crowned the Section’s Senior Player of the Year. Hronek concluded the round at -1 (71), ahead of Gregory McClimans, who finished even (72). Closely behind McClimans is David Damesworth, who trails after finishing the round 1-over par. Following Damesworth is an 8-way tie for seventh place with John Falcone, Gene Walter, Mike Furey, Mark Rummings, John Somers, Rod Perry, Greg Koch and Paul Ferrier. Somers made an eagle on hole 12!

Changkija, who is currently ranked second overall in the NFPGA Player of the Year standings and first for NFPGA Woman Player of the Year, asserted a commanding lead in the Women’s Division, as she leads Jennifer Borocz and Stephanie Connelly Eiswerth, both of whom shot +4 (76) as well as Emily Motta, who shot +9 (81). Borocz made a birdie on the first and 18th holes.

With leaderboard standings as close and competitive as these, Round 2 will prove to be crucial, as players will strive to break away from ties and command a bold lead!

Come back tomorrow for a recap of Round 2, and check out the full leaderboard from today’s first round here!

After selling out in less than an hour, the 2022 NFPGA Section Championship will surely be one to remember. One hundred players will take to TPC Sawgrass for Round 1 of the Section Championship on Monday, September 12th. The most anticipated Section event of the year is one that also brings high stakes: the event will serve as the deciding factor to ultimately determine the “2022 NFPGA Player of the Year,” as the Championship is the final points event of the year.

Matt Borchert, who currently ranks as No.1 in the 2022 NFPGA Player of the Year category, has racked up impressive wins and accomplishments throughout the Tournament Season, including the Match Play Championship and finishing as the low Club Professional in the Team of 20 at the 2022 PGA Championship.

Changkija, the Assistant Professional at ChampionsGate Golf Resort, finished first at the most recent Section event last month. She also pulled off a remarkable triumph at the 2022 LPGA Professionals National Championship, where she squeaked out a win after a 3-hole playoff. Changkija, who currently ranks No.1 in the 2022 Woman Player of the Year, will compete against Jennifer Borocz, Stephanie Connelly Eiswerth and Emily Motta in the Female Division. Borocz and Connelly Eiswerth will represent the U.S. in the Women’s PGA Cup in October.

Lastly, another player to watch is John Somers. The Head Professional at Southern Hills Plantation Club has had key victories throughout the Tournament Season, winning the Pro-Pro Championship at TPC Prestancia in June and last month’s Professional Championship at Hammock Beach Resort.

We wish everyone playing in the Section Championship the best of luck as they compete on the iconic THE PLAYERS Stadium Course at TPC Sawgrass. Following every round, there will be a daily wrap-up, providing highlights and leaderboard standings. Additionally, stay tuned to our social media channels throughout the week for more extensive coverage.